Sprint retrospectives have in the past proved challenging for me as a Scrum Master:

Based on these challenges, I introduced a few process changes to our last retrospective and it made a huge difference. We got rich feedback from all pigs, discussed only the relevant points and had far less Scrum Master interference in the process improvement solution space. Here’s what we did:

Elect a Scribe: A scribe was nominated to take points down on the whiteboard. Rule: The scribe at the whiteboard cannot offer an opinion or do any filtering. He/she must simply take down what is being said in a succinct way (the scribe is allowed to ask questions just for clarity). As far as is possible the scribe must use the words of the person making the point – don’t unnecessarily paraphrase. The scribe can be the Scrum Master provided that the rules are followed.

Elect a Timekeeper: The time keeper monitors the timeboxed activities and calls ‘Time’.

(B) Pig feedback: What went well, what could be improved [Next 45 minutes]

Once the feedback points were captured, each pig was given a distinct color whiteboard marker. They were given 15 minutes to peruse the board and were allowed to make seven votes in total against points that they felt warranted further discussion (you need the distinct color to keep track of your vote count). The number “7” was arbitrarily chosen based on the total number of potential discussion points on the board. Pigs were not allowed to make more than one vote per point thus limiting the potential for any pig to force an issue into discussion (the jury is out on this part).

At the end of 15 minutes, once all votes were cast, we could sum up votes and select the pertinent points for discussion (5 minutes).

Previously we had no aggregated view of topic relevance. The voting mechanism addresses this shortcoming! 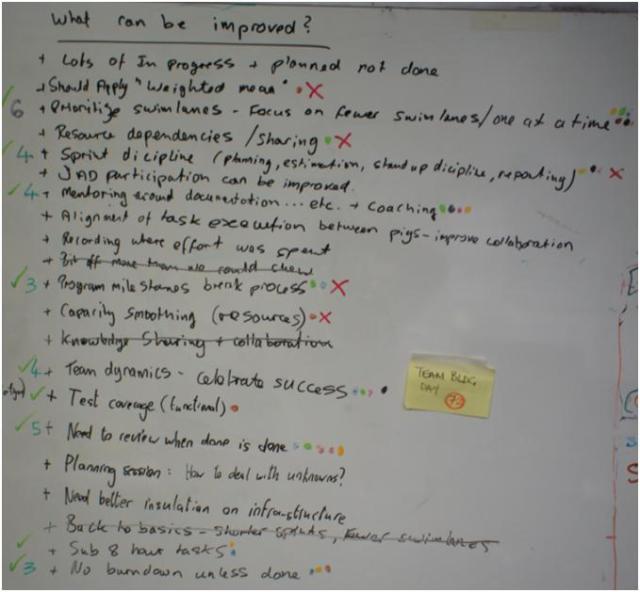 "What we can improve" - note the voting marks against the points!

In this timeboxed period, the pertinent points were explored in order of reducing importance. This ensured that items that were seen to be especially important were not short changed on discussion time.

The scribe would take down any process improvements that came out of the exploration exercise.

This time was different. Because the scribe had neatly captured the points against “What went well”, “Areas for improvement” and “Process improvements”, capture of the knowledge was simply an exercise in photographing the whiteboards and distributing them on e-mail to the pigs (awesome!).

This entry was posted in Uncategorized. Bookmark the permalink.